food aggression in dogs - biting the hand that feeds

We have all heard this expression, but where does it come from? Chances are – surprise surprise – it comes from our relationship with dogs. I have worked with dogs in the past with all kinds of eating disorders, but the one that causes the most distress is food aggression in dogs. Some owners have come unstuck trying to take bones from their dogs while others (in extreme cases) get a nip every time they have put the dog’s food bowl down on the floor. Talk about ungrateful! 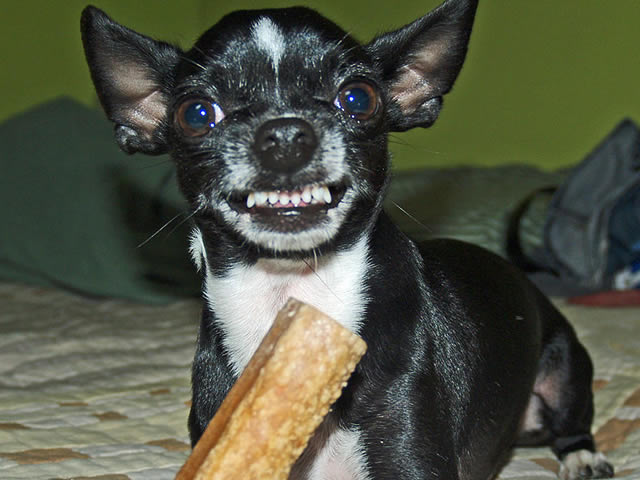 Actually, when you understand the nature of a dog and the ways it communicates, this behaviour is understandable and easy to avoid. The fact is that we humans also have this tendency and it can even manifest itself is one of the most social settings – a restaurant.

I was once accused of “growling” at a waitress in Perth. Picture the scene – I was enjoying a nice meal with friends and I had stopped eating to answer a question. I had QUITE CLEARLY put my knife and fork at an angle – the universal signal that I was not finished with me food, right? Anyway, the waitress came right up, placed her hand on my plate and asked, “Have you finished?” I looked at her right in the eyes and simply replied, “No.” As she left, my friends told me that the word no had come out as a low growl!

When I had actually finished eating, I put my cutlery together – again the universal signal to say that I have had enough. Interestingly though, I add two more little gestures that nobody has taught me. The more I ask people about this, the more it seems clear that I am not the only one to do it either. Once the knife and fork are put together, I push the plate away a little and lean back in my chair. Do you know anyone who does that? The reason why is fascinating (but I’ll explain it in a moment).

Our relationship with food

Don’t you hate it when the waiter comes up to you while you’re eating? I understand they have to do it to avoid some people eating their fill then complaining and refusing to pay, however it still annoys some of us. There is a perfectly natural reason for this which links in directly with our true link with dogs. Remember that humans are also predators by nature and we have a personal space that is precious to us. Some people are far more sensitive to this than others but none of us likes somebody invading our personal space without permission. This is particularly relevant while we are eating. In our not-too-distant past (before we started farming and keeping animals in pens so they didn’t run away) we would hunt. We would eat quickly in case someone (or something) came along and stole our precious food. This explains why people still eat far too quickly and can go crazy at an ”All You Can Eat” buffet. We are naturally geared to feast and fast, although that doesn’t happen if you are lucky enough to live in a country where food is plentiful. 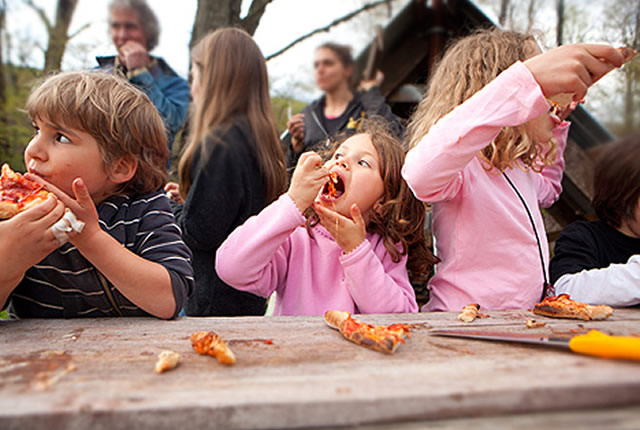 In exactly the same way, wild canines will gorge as quickly as they can in many cases to get the maximum amount of food and at the same time minimise the risk of having it taken by another animal. When they do so, there is a “pecking order” to who eats. One rule is that unless invited, everyone waits their turn. Anyone who tries to muscle in without permission risks getting told off in no uncertain terms. At the top of the pile are the leaders who will eat first. This makes sense – as the decision makers and responsible members of the group, they need to be at 100% so a full belly is necessary. My grandad used to tell me of his childhood and how his father would always get a decent meal on the table first as he was the bread-winner. If at the end of the week (before payday) all there was for the rest of the family was bread and dripping then that was the way it was. As long as my great-grandfather got fed, the family had a better chance of eating. 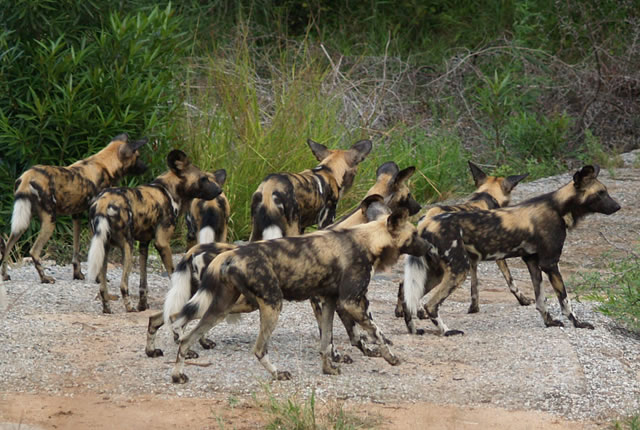 Eating first is vital (in a very literal sense). It also reminds everyone who is the most important one in the group and can be enforced from time to time by the leaders if they feel a reminder is needed. I saw a pack of wolves who live in a big animal park in France a while ago whose Alpha male would insist on eating first once a week. It was no coincidence that he did this after a day of not being fed when food is suddenly even more important. The others stayed away and let him eat until he had his fill. Once he had walked away, that was the signal for the next in line that the coast was clear and they could start.

Now let’s go back to my little extra ritual in a restaurant. By pushing my plate away and leaning back, I am unconsciously copying that wolf in France by creating a distance from the food. Of course, since I realised this I still do it but am amazed at how much we think like our fellow predators! This explains why some dogs will growl or even show aggression when people go near them while they are still eating. The rules clearly state that while eating you should be left alone. Trying to take a bone away from a dog while it is still eating can lead to a problem because of this. Similarly, on the rare occasion (and thankfully it is rare) that dogs bite the hand that feeds them, it is because they are confused about their position in the pack. If they think they are the responsible ones and the lower ranking members DARE to have the food before them, they can take it upon themselves to tell off the naughty behaviour. It’s obvious when you think about it. 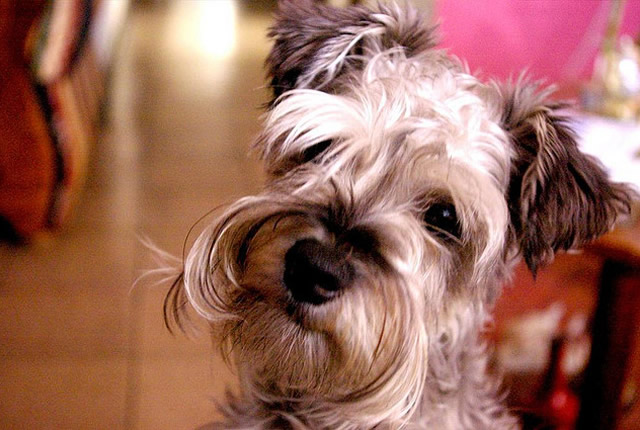 How can we stop it?

The way to solve this is simply by copying what canines do sometimes to show who is in charge; we have to eat first. This does not mean having our dinner first though and feeding them later. Dogs need to see an immediate signal. It really is simple to do and goes as follows:

This shows your dog that you eat first and they can have what is left. This simple technique we call Gesture Eating takes away the confusion in a dog’s mind about who eats first. For aggressive dogs it is a good idea to Gesture Eat behind a dog gate for safety. If it growls, the food does not go down. If the owner tries later the dog will have a chance to think about what it is doing. The food only goes down once the dog is calm.

To highlight how people think just like dogs in a restaurant, check out my short film about the Bad Waiter:

If you would like to know more about dogs and food (including why some dogs are supposedly “fussy eaters” – I have met dogs that eat better than I do!) then drop me an email via my website www.tonyknightdoglistener.com