how to stop dogs from stealing food

A common question I get asked, is how to stop dogs from stealing food? When I was a child there were plenty of public information films designed (it seemed) to scare the bejesus out of us. One of them showed two young children pretending that they were drinking a fizzy drink, only they were doing it out of bleach bottles. The slogan was “Keep Bleach Away from Children!” Good advice – kids don’t necessarily know what it is they are putting into their mouths. Once as a young boy I was staying at my Nan’s house and I happened to spot what looked exactly like lime green coloured Smarties in a jar in the kitchen. They didn’t taste anything like Smarties though. I still don’t know what they were exactly but missing Hormone Replacement tablets were mentioned, along with remarks that I might be needing a bra soon…


Dogs will be dogs

The advice to keep things out of reach of children is always valid as we appreciate that youngsters may not know what they are eating. The same is true for dogs too, but also we have to understand what kind of animal we have in our house to avoid the so-called “stealing” of food. I remember back in the old days, one of our dogs that could open the refrigerator door – a talent that saw a couple of Mum’s home-made shepherd’s pies go missing on one memorable occasion. He did leave the pie dishes thought which was thoughtful…


Dogs are by nature predators AND scavengers. They will eat what they can when they are hungry as they do not know the next time they are going to eat. Sure, some can get excited around the usual feeding time but that is no guarantee that it is going to happen. If you think that humans don’t have this problem you have never been to the shops just before Christmas… 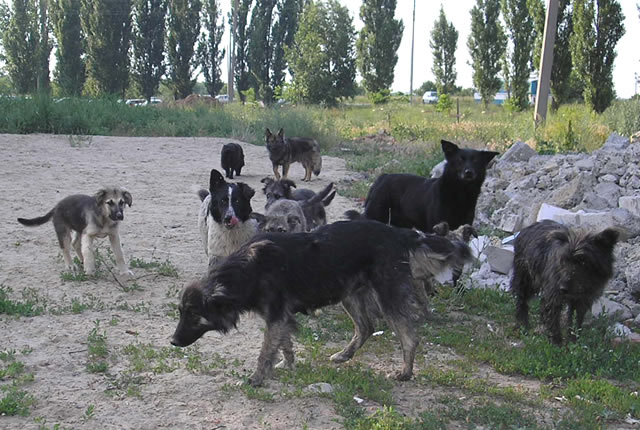 Stray dogs in Russia survive by scavenging for food

HOW A DOG SEES IT

However, there are rules among dogs that should be respected when it comes to food. One of these rules is that if an individual is eating they should be left to eat in peace (unless they allow another to eat with them). I have learnt from experience that my partner doesn’t share her hot chips unless she gives the go ahead! Once enough has been eaten, a dog will walk away from the food to show that the coast is clear and the next in line can help themselves. I have realised recently that when I have finished eating in a restaurant, I will actually push my plate away and lean back a little to show the waiter that they can take my plate away now. As I say so often, humans think like dogs all the time without even realising it…


Herein lies a problem; if leaving food means that the coast is clear, we cannot accuse dogs of stealing food if we have walked away from it. If you put down a sandwich on a table to go and answer the door, according to your dog the sandwich is now fair game. Some dogs are agile enough to actually get onto kitchen counter tops, or smart enough to open cupboards and refrigerators to get to food that has (according to them) been left by the humans. Similarly, expecting a scavenger not to be tempted by a trashcan is like expecting cows to obey the “Keep Off The Grass” sign. It’s not in their nature to understand. If your dog is raiding the trash, put it where the dog cannot get to it!

A dog reaching for food when it's left in reach

WAYS YOU CAN STOP IT

Telling a dog to wait before you give it food may be a useful trick for them to learn in case they ever pick up something that could be harmful, but it doesn’t show the dog that you are the boss. If you find your dog helping itself to some leftover food, chalk that one down to you not making it too hard to get to. If you tell a dog off for this behaviour, you can actually show the dog a way to get your attention on its terms too (dogs are very good at trying ways to do this, whether it gets good or bad attention – delinquents are only naughty if it gets attention…).


Feeding a dog from the table is also setting yourself up for a problem. Dogs will beg if it works, and they also know who the weakest link is. These people are those who have a crowd of dogs drooling right next to them – nice. If you do want to give your dog leftovers, then simply put them into the dog’s bowl ready for when you feed them. I add a Gesture Eat when I feed my dog to remind her that I eat first (a simple technique that responds directly to their nature). This helps to resolve any confusion in a dog’s mind and can contribute to stopping a dog from eating everything in sight.


In the old days – before my Mum developed Amichien TM Bonding – she tried to deal with dogs that “stole” food by actually making a foul sandwich filled with chillies and mustard. It didn’t stop the dogs (but it did make a mess a while later…). Trying to make it an unpleasant experience is not really going to work – I have seen my Pru eat bird poop from under a tree at my house (again, one of the reasons that I do not encourage her to lick my face!). I can’t imagine that this is pleasant for her, but if you don’t know the next time you are going to eat, you make the most of opportunity.


In short, we should always remember that we have brought into our homes an animal that cannot help but be what it is. To that end, we should learn to manage the beast and not be surprised when their nature comes to the fore. I am not a big fan of pasta (yes, people like me do exist) but one time in Central America when the choice was to eat lasagne or go hungry… Tony ate lasagne. Bleurk!

You can find Tony on Google+