how to fox proof your chicken coop

Some urban areas of Melbourne are home to up to 16 foxes per square kilometre. This is a huge number when compared to most semi-arid grazing areas where numbers are generally less than 2 per km².

Although you may typically picture foxes in wooded areas, many live in urban settings where there are suitable hiding places and an abundance of food. Bushlands and parks provide ideal daytime hiding places but these mammals will also seek refuge under railway platforms, under houses, behind sheds or in quiet gardens.

Since these predators are prevalent in urban areas, it is crucial that you have a fox proof chicken coop.

Are foxes native to Australia?

The European Red Fox was deliberately introduced to Australia in 1855 for recreational hunting purposes. In the early 1870s this animal became established in the wild and now the fox is seen across most of Australia.

According to feral.org.au fox numbers have remained high in Australia for the following reasons:

The clever, cunning and sly fox

Foxes are often personified as being sneaky and in some ways this is true… They are quick hunters with the ability to climb high and fit into the smallest of spaces.

This short clip filmed by the Sunshine Coast Council shows how important it is to fox proof your backyard chicken coop. It shows how a fox can tear chicken wire using their teeth and quickly enter a small gap in the fence.

It’s much better to prevent an attack from occurring rather than reacting after an attack has happened. As the saying goes – prevention is the best cure!

There are several humane methods of deterring foxes away from your back garden and ultimately away from your chickens. These methods do not inflict pain or suffering on foxes unlike other pest control methods such as inhumane trapping, shooting and poisoning.

Make your garden less attractive to urban foxes by removing areas for them to hide. You can do this by blocking spaces under your house or behind your shed.

You can also install plastic fence spikes to put them off climbing over your fence and into your garden. These are strips with plastic spikes that can be secured all the way along the top of your fence.

They help to deter unwanted intruders including other people, cats, possums and foxes. Made from hard plastic, they are uncomfortable to touch but don’t cause serious harm like metal barbed wire.

Foxes are scavengers and will see your rubbish bin as ‘fast food’! Ensure that all rubbish is safely confined in a wheely bin and not on the floor in plastic bags. Don’t forget that leftover pet food will entice foxes as well, so be sure to clean up any food scraps/bones at night.

Foxes are primarily nocturnal animals therefore your chickens are most at risk during the night. Unfortunately this is also the time that you are likely to be fast asleep and oblivious to intruders in your garden.

Sensor lights are often recommended as a deterrent for burglars but they also work well to keep foxes away. When a fox triggers the motion sensor, the light will go off and startle them. The fact that they are exposed by such a bright light should prevent them from trying to gain access to the coop.

A dog is a great way to keep foxes away from your coop. Foxes are very territorial and the smell of a dog can keep them away. If, however, the fox is very hungry they may still try to enter the garden.

If your dog sleeps outside they’ll probably hear a fox and sound an alarm bark, scaring the fox away. If you’re pooch is indoors with you, curled up in bed, they are unlikely to hear a fox’s gentle footsteps and won’t be of much use!

There are various repellents you can try to make the area surrounding your chicken coop undesirable to foxes. This can include chemical scent repellent, motion activated sprinklers and ultrasonic devices.

An adult fox can pass through a 10cm diameter hole and can easily scale a 6ft fence or wall. As demonstrated in the video above they can also tear apart thin wire with their teeth. This means that you will have to reinforce your current chicken coop to ensure that it is predator proof.

The way that you go about this depends on the type of chicken coop that you own. Below are solutions for both mobile and stationary hen houses. 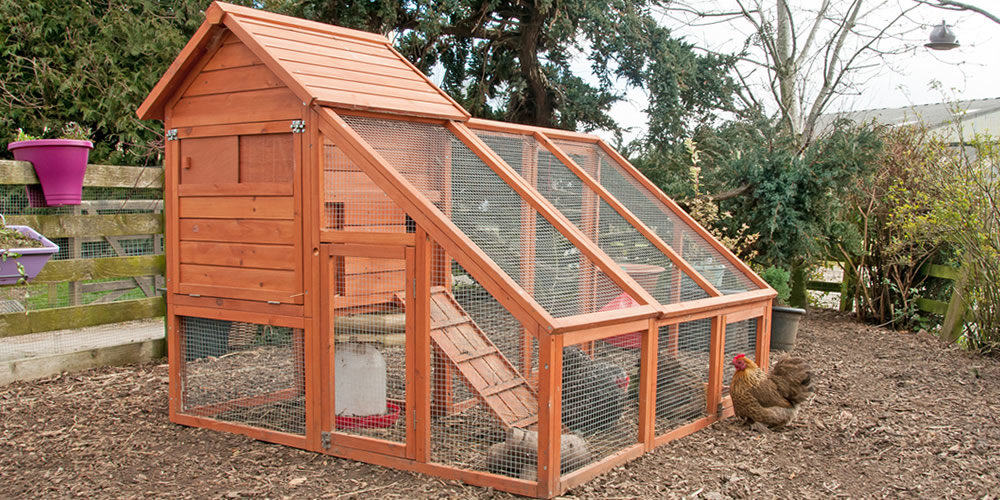 Chicken tractors, also referred to as mobile chicken coops, are designed to be moved around your garden. These are ideal for backyard chickens that are kept as pets or as a hobby since they are cost effective and easy to maintain.

The coop pictured above is suitable size for 2 or 3 hens. This is a good flock size to provide tasty eggs for a family! Although it comes with adequate security against foxes, we strongly recommend that you fox-proof this and similar coops.

Listed below are ways that you can predator proof a mobile chicken coop:

Prevent foxes from chewing through wire

Many chicken coops come with relatively sturdy wire mesh however to ensure that foxes cannot break in; it’s wise to install something a bit tougher.

A sturdy steel mesh, like the one pictured below, is suitable for predator proofing. It is too thick for a fox to bite and too small for him to squeeze through. You can find mesh like this at your nearest home improvement store. Simply attach it to outside of the coop using metal cable ties or industrial staples. 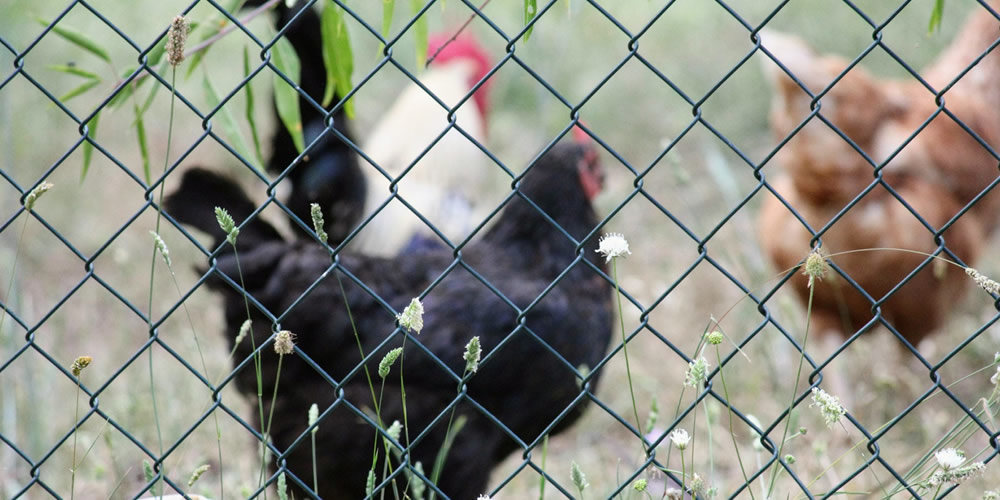 Prevent foxes from digging under

Even if a fox cannot get through the wire, they may be able to access chickens by digging underneath. There are two ways of preventing this:

Putting mesh on the base of the enclosure is an easy and effective way to stop foxes from burrowing underneath. This mesh can have slightly larger holes of around 15cm x 15cm so it gives your chickens a bit of space to reach the grass/dirt underneath. A fox may fit through this gap if the mesh was upright but due to the angle of the burrowing they will not be able to enter when it is used on the base.

A skirt of strong wire mesh that goes around the chicken coop (but not under it) can help to prevent foxes from burrowing because it prevents them from digging nearby. If you are going to install a mesh skirt, you must remember that it will make it more difficult to move the coop around the garden.

Some people may not like the idea of putting mesh on the base of the coop because they want their chickens to be able to scratch freely in the dirt. You may wish to only use a mobile coop during the day when foxes are less likely to hunt. Then at dusk you can move them into a completely secure coop with four secure walls and a base.

Foxes are clever and will easily knock open simple twist catches so it’s important to check that your coop has latching bolts on any openings.

If you are particularly forgetful or have children that are helping to take care of the chickens, it’s safer to install two locks on the primary doors. This way if one is left open or isn’t secured properly, there is a backup.

If you are looking to house a larger number of hens or wish to have a walk-in coop then a stationary chicken coop may suit your needs better. Since these homes are designed to be in one spot, fox-proofing is slightly different. 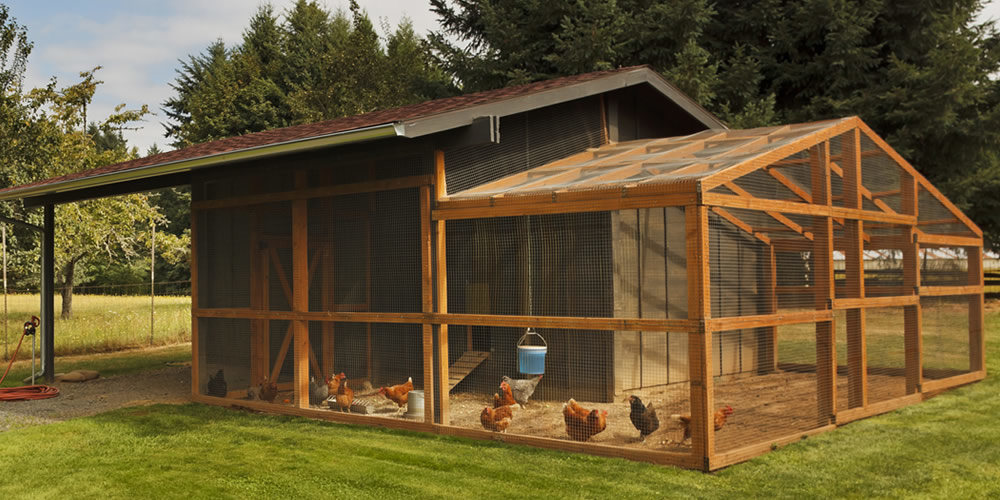 The coop pictured above has been constructed especially for someone’s property. It could house up to 20 hens and includes a predator proof chicken run. Listed below are several ways that you can predator proof a stationary chicken coop:

Prevent foxes from digging under

The coop in the picture is being constructed with a solid base to both the hen house and the run. This can be achieved by using the same material used in the construction of the coop or by pouring a solid concrete base. A solid base stops foxes from burrowing under and a deep layer of litter will mean the chooks won’t even feel it.

Some people choose to leave the floor exposed since it gives their chickens a place to scratch around naturally in the dirt. When leaving the ground in a chicken run exposed you must still take measures to ensure foxes do not burrow under. You can do this by burying an underground barrier all the way along the edges of the coop. This barrier can be made using metal sheeting or the same steel mesh that you’ve used on the windows and doors. 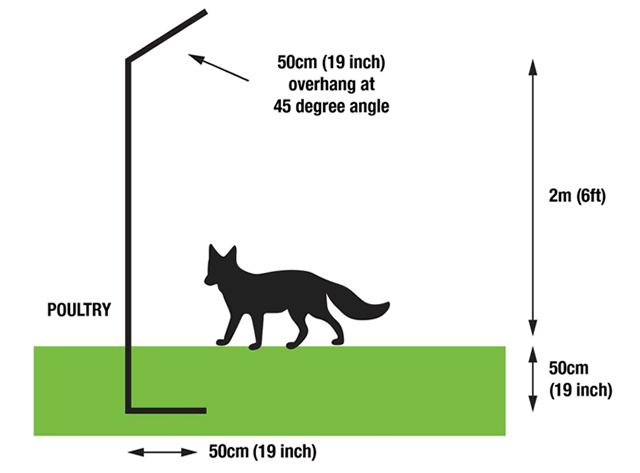 The diagram above demonstrates the ideal layout and measurements for a fox-proof fence as recommended by Wildlife Online.

Prevent foxes from chewing through wire

As mentioned before in the construction of your permanent chook house you must include strong steel mesh wire. You may even want to include two layers of wire for extra security that includes both a large and small grid mesh.

Prevent foxes from squeezing through holes

Foxes can manoeuvre themselves through the smallest of spaces so you must ensure there aren’t any gaps around doors, windows or ventilation holes.

You may have chosen to build your stationary chook house to be large enough to walk in. This may provide convenience to you when feeding or collecting eggs however it gives foxes another way to get in.

Install a couple of locks on the door including one that younger children in the household cannot reach. Children are curious and the last thing you want is them to sneak a look at their pets and accidentally leave the door open overnight.

Check your chook house every day

Spending a few minutes checking over the coop every day at dusk will save the heartache of losing a chook. This is something you can easily work into your routine when caring for chickens.

A few factors could ruin your fox-proofing efforts. These include:

It is very sad when backyard chickens are attacked by predators but you musn’t forget that it isn’t a personal attack. Foxes do not hate humans or chickens; they are only doing what they need to do to survive.