It would be great to have a high tech, telepathic translator that lets us talk mind to mind with our beloved canines. Unfortunately, until scientists figure out the details, we’ll have to rely on more down to earth methods of communication. No bones about it, dogs do have their own language! With a perceptive eye, you’ll be able to understand your dog and notice those behavioural tells-the next best thing to mind reading! Some of this might come instinctively to you, but there are important differences between how canines and humans communicate, and subtle complexities that are worth knowing to understand your pup’s behaviour, develop a good relationship, and avoid behaviour problems. 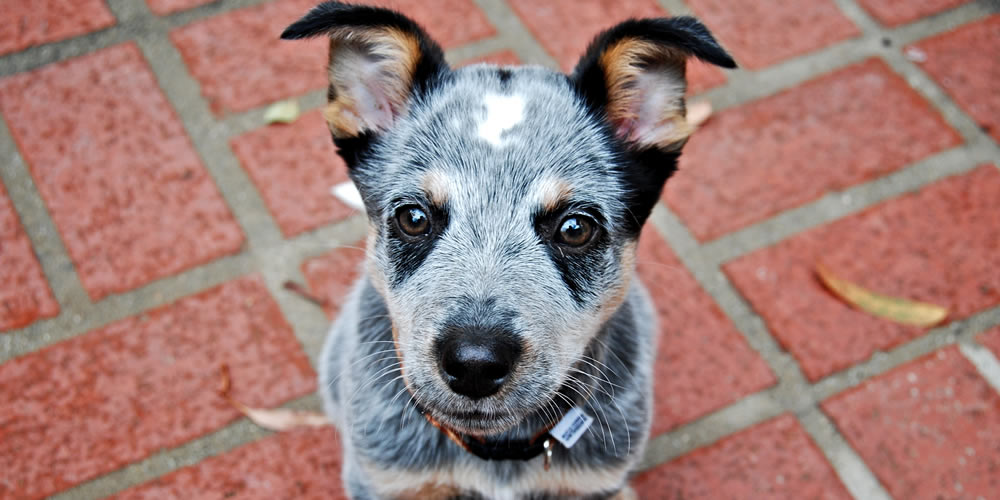 Whilst humans are great verbal communicators, canines are experts in body language. Dogs use their body from top to tail to signal to humans and other dogs- ears, eyes, mouth, tail, posture, the whole kit and caboodle! One signal alone may be vague, but if you pay attention, the combination of all the signs your dog is exhibiting will give you a good idea of what they’re feeling, and how you should approach them…

Ears
Check out your pup’s ears for a read on their mood, especially focusing on the base of the ears. Ears up and forward indicate either interest or aggression, while ears flattened against the head to various degrees indicate the extent to which your dog feels fearful or submissive.

In addition to displaying readable cues, ears are also busy listening out for anything interesting! Given that dogs’ ears are highly flexible, they can be difficult to decode without considering other body language.

Eyes
Relaxed eyes or droopy eyelids indicate happy or calm feelings. Surprise or attentiveness shows in rounded eyes. When the eyes are wide enough to see the whites (called “whale eye” by behaviour experts), then your dog is upset or stressed out. Be wary if you see “whale eyes”, as tense dogs are more likely to bite. Try to diffuse the situation or give pup some space.

Mouth
As a general rule, when a dog’s lips curl vertically showing teeth, this is aggression or fear, and when the lips pull back horizontally, like a ‘grin’, it’s a gesture of submission to a dominant human or animal. To further distinguish fear and aggression, look at the corners of the mouth: if they are pulled back this is likely to be fear, and if they are pushed forward this indicates dominant aggression.

If the mouth is relaxed, slightly open and perhaps with the tongue out, this is a good indication your pup is relaxed and happy. A lolling tongue may also show intention to lick, which in doggy language is a sign of submission and respect.

Tail
A wagging tail conveys the dog’s energy level rather than happiness, so it’s best understood in context of what the whole body is doing. If the whole body is relaxed and moving along with the wagging tail then pup is probably happy, especially if you can discern a happy facial expression. However, you might notice the tail going even when your dog’s body is tense and unmoving. If the tail is wagging in a high position combined with a tense body, your dog might be feeling stressed or even aggressive, so you should be cautious.

A low wagging tail might indicate nervousness, and a tail tucked between the legs indicates fear or submission. A stiff, still tail might suggest pup’s attention has been caught by something of interest. A bristled stiff or quivering tail displays dominant aggression and confidence.

Overall Posture
A dog’s body language is honest, though it’s possible for them to be feeling more than one thing at once, especially if they’re anxious. The way in which your dog combines these tells will provide you with an insight into pup’s inner life. For example, anxiety about meeting a new dog might resolve into confidence given time, but if a dog feels overwhelmed or crowded, anxiety might turn into either fearful aggression or total submission. If you watch for body language you’ll be able to spot troublesome situations before they brew over, and resolve them in accordance with your furkid’s feelings. 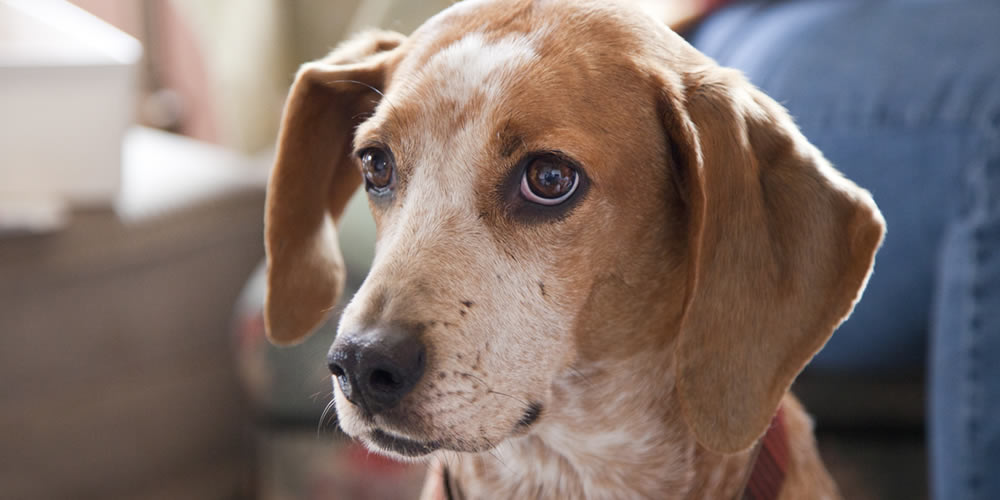 Submission and Dominance Behaviour: Interacting with your dog

There’s one other big component to canine behaviour that’s key to understanding your four-legged friend. Dogs are pack animals, so they like to know where they sit in the hierarchy. Behaviour that marks these positions might seem odd to a human, but once you recognise the intention behind it, some odd dog behaviour makes a whole lot of sense. You can even adopt some of these signals to talk back to your dog in their own language.

Dominance behaviour in dogs manifests in a number of ways. Confident dogs might stand tall to show off to other dogs, much the same as humans! Leaning or pushing (and even full body barging) against people or other animals are also bold dominance tactics (think of how sheepdogs herd their flock).

Leaning forwards over others to dominate or intimidate is also common. You might see your dominant dog resting his or her head or paws on the body of your less dominant pet. Essentially, dominant dogs make themselves seems bigger and control the space they inhabit. You can use similar behaviour to communicate with them. For example, if your dog is jumping at you, rather than try to control their movement with your hands, you can try tucking your hands behind your back and confidently leaning towards your pup, taking control of the space in a way they can understand.

By contrast, dogs displaying submissive behaviour make themselves seem smaller and non-threatening, perhaps crouching low to the ground, rolling over to display the belly and tail-tucking. There’s a whole range of appeasement gestures that dogs make to indicate they aren’t looking for a fight. 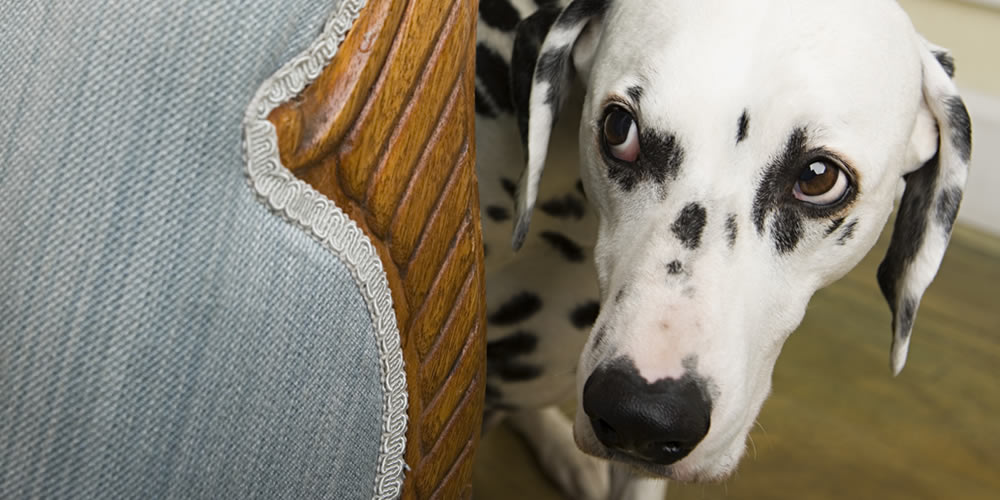 The phenomenon of submissive urination can be a real head-scratcher for pet owners whose dogs (most often puppies) are toilet trained, but still wet at their feet when they come home or scold their pet. This behaviour actually has nothing to do with toilet training, but is a gesture of submission to show that your pet recognises your authority. Once you understand that the cause of this behaviour anxiousness, you can appreciate that confidence-building techniques will be more effective than anxiety-inducing punishment.

Other submissive behaviours dogs use include submissive grinning, lip licking and yawning while avoiding eye contact. You can see where wires might cross while communicating with humans, who use eye contact as a sign of respect. By contrast, dogs interpret direct eye contact as dominance behaviour, so if you want to put a dog at ease, avert your eyes, turn slightly away and yawn or lick your lips. They’ll interpret these signs as being much friendlier than if you make a beeline and start patting them uninvited!

The same advice goes for hugging and kissing your pet. While dogs might get used to human affection over time, initially hugging might be interpreted as dominance behaviour rather than affection (in dog language, they only grapple with each other during play, mating and fighting!). Kissing actually indicates the opposite: dogs lick each other as a sign of submission. If you kiss your pooch on the face and near the mouth, you might actually confuse their perception of the family dominance hierarchy, which can be dangerous and result in aggression and conflict.

This is only a brief overview of canines’ complex communicative behaviour. If you need extra help, behavioural experts are full of useful advice. There’s a lot of great resources out there for dog-lovers about canine behaviour, which can help you and your four-legged friend communicate, simplify training and manage behaviour.